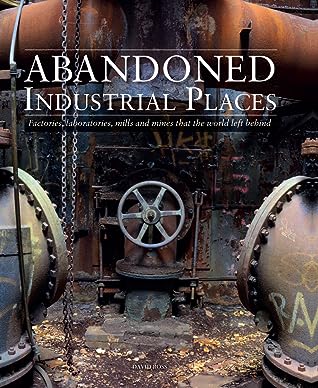 Last year I was fortunate enough to recieve an ARC of the photography book Abandoned Industrial Places: Factories, Laboratories, Mills and Mines that the World Left Behind by David Ross through Netgalley. I read it shortly afterwards and today I'll post my review.

Once these industrial spaces were celebrated and thriving; now, they’re ghostly and forlorn. When times change and they’re no longer needed, power stations, gasworks, car plants, factories, and mine derricks are often too large to destroy. So they linger, looming over the landscape, haunting relics of the past. Ranging from Cuba’s unfinished nuclear power station to atomic test sites in England, from Nevada’s silver towns to a French coal-washing facility, from a sugar factory in Belgrade to a whole mining island in Japan and, yes, Chernobyl, Abandoned Industrial Places captures these imposing, often eerie, structures. Some are magnificent pieces of architecture, others appear like ragged pieces of piping out of science fiction, but each one tells a fascinating story.

The abandoned places include:

My Thoughts on the Book
It was fun going through this book, as it was so many great photographs by fascinating abandoned places. If one is into architecture, history or urban exploring, I think this is a fun book and I'll sooner or later purchase a physical copy of it.
faglitteratur leseeksemplar netgalley omtale