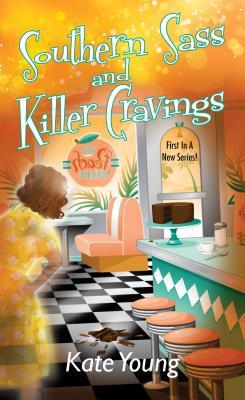 Last year I was lucky enough to recieve an ARC of the cosy mystery Southern Sass and Killer Cravings by Kate Young through Netgalley. I read it shortly afterwards, but I haven't published my review until now.

Description from Goodreads
Life has always been sweet on Georgia's Peach Cove Island, but a case of murder has Marygene Brown down in the pits . . .

For generations, the women of the Brown family on Peach Cove Island have been known for their Southern sass and sweet homemade desserts at their beloved Peach Diner. Since their mother's passing two years ago, Marygene has been stuck in Atlanta while her sister Jena Lynn has been running the family business. Now Marygene has left her husband and returned to her hometown, where she can almost feel Mama's presence.

But all is not peachy back home. Marygene has barely tied on an apron when a diner regular drops dead at the counter. When it turns out the old man's been poisoned, Jena Lynn is led away in handcuffs and the family eatery is closed. Now, to save her sister and the diner, Marygene must find the real killer. With some startling assistance from her Mama's spirit, Marygene will be serving up a special order of just desserts . . .

My Thoughts on the Book
This was an enjoyable cosy mystery with complex characters and I liked the Southern setting. I also liked the humor in the novel as well as it deals with the emotional aftermath of domestic violence. I might add that I'm tempted to try a few of the recipes in the book, such as the Surf & Turf burger.
krim leseeksemplar netgalley omtale roman