Review; The Occupation by Deborah Swift 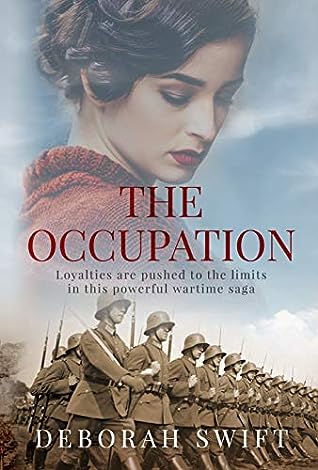 Earlier this month I was fortunate enough to recieve a press copy of The Occupation by Deborah Swift through Netgalley. I read it shortly afterwards and today I'll post my review.

Description from Goodreads
A page-turning historical saga that will pull at your heartstrings! For fans of Freda Lightfoot, Pam Jenoff, Sebastian Faulks and Kate Atkinson.

When Nazi forces occupy Jersey in the English Channel Islands, Céline Huber, who is married to a German, must decide where her loyalty lies.

Love for her island, and fear for her Jewish friend Rachel, soon propel her into a dangerous double life.

Meanwhile, Céline’s husband Fred is conscripted into the Wehrmacht in occupied France.

Horrified by Nazi acts of atrocity and torture, he soon becomes a double agent for the French Resistance.

But when things go wrong, and his Nazi masters discover his true allegiance, he finds he has the whole of the German Army on his tail.

How far will Céline go for her best friend? Will Fred make his way home to her?

Or will their lives be changed forever by the brutality of war?

THE OCCUPATION is a moving war & military saga following the separate stories of a young man and woman through the years of the Second World War as they fight to survive.

My Thoughts on the Book
The Occupation is a beautifully written novel and it did a nice job of telling both sides of WWII (at least within this tale). The descriptions are great and the characters, especially Céline, Fred and Rachael, have depth to them. It's also clear that the author has done some research in regards of WWII and the Channel Islands. It is a heartbreaking novel at times, but it needs to be read.

Also, if you want to know a bit more about the English Channel Islands during WWII, feel free to check out this episode of Nazi Megastructures.