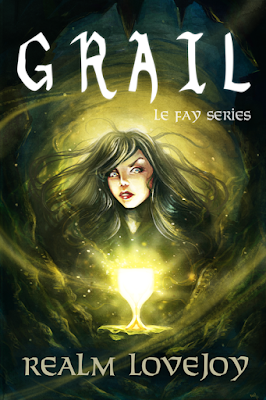 A hero has fallen, and darkness threatens a splintered Camelot. In the midst of turmoil, the last hope for the kingdom is Morgan le Fay. Morgan is both feared and revered . . . and currently in prison for treason.

In the wake of King Uther’s tragic death, the wicked Mordred is closing in on young King Arthur, and the boy king turns to Morgan for help. Freed from her imprisonment through his order, Morgan searches for a way to protect him. But she is still an outcast, and no one believes her suspicions about Mordred.

To save King Arthur, Morgan must reach the greatest Royal Relic in the world—the Grail—before Mordred does. It’s a journey that will challenge her in ways she’s never been challenged before. Traveling deep into a land of darkness, she will need to overcome the ghosts of her past to find her true power.

Can Morgan defeat Mordred and save King Arthur? And this time, can she defend Camelot without destroying herself? In this third book in the Le Fay series, author Realm Lovejoy reveals secrets from the past as Morgan’s epic journey unfolds.

Previous books in the series (click on images for Goodreads links):

Excerpt:
Footsteps sound across the marble. I swallow and get back to mopping, watching the marble and wood patterns beneath become shiny with the cleanser. It’s a small relief to be surrounded by beauty after being locked in my closet room. I study the depth of the wood grains, the slices of gold and sparkling black marbles.
The steps stop in front of me. A clearing of the throat.
I grab the handle of the bucket, preparing my leave. “I will be out of your way,” I say briskly.
“Morgan?” the voice says.
I halt, meeting eyes with Lancelot.
He looks a bit older too. The grays in his eyes more somber like the ancient temple rocks I saw in Avalon, stained with mist and forgotten by man. There’s a welt over his left brow that wasn’t there earlier.
The space between us seems defined as the light rays slice past me, toward him. We stand there with dust glinting in front of us for what seems like minutes.
“Sir Lancelot,” I say, straightening. “I’m in your way. Excuse me.”
“Morgan,” he repeats.
I tighten my grasp on the handle, worried as to where this is going. I push away the memories of him.
“I’m sorry,” he says, not taking his eyes off mine. “I didn’t know what to do. I saw you in the cafeteria serving the food and I… well, I froze up with shock. I heard about the parole thing. I didn’t know you’d be… doing work like this.” He shakes his head. “What am I saying? I’m glad you’re alive.”
“Thank you,” I reply stiffly.
“I wanted to see how you’re doing.”
Having someone want to “see” me seems worse than being invisible.
“This is how I’m doing,” I say, motioning to the mop and my work—the shiny floor.
The glossiness ends at the halfway point between us, like a dividing line. He moves his foot, the boot coming a smidgen closer.
“This is… not acceptable,” he says.
I tense even more, afraid to know what he means.
“This,” he says again, pointing to the mop, the bands, and my terrible jumpsuit. “You are so much more than this. The Cabinet is crazy to have someone so gifted waste away.”
“Lancelot,” I blurt out, terrified by his care and where it has led to before. “Don’t pity me. Just move on. Forget about everything—about me. That’s what everyone else is doing.”
“Nobody will ever forget about you. Right now everyone is desperate to feel safe and normal. I admit even I’m desperate and tempted to jump into denial. And you. I’ve never seen you like this, not even in prison.”
I snort. “Jumpsuits weren’t my thing, exactly.”
He points at my face. “I mean, your eyes. You have dead eyes. It’s not like you to meekly mop and serve food quietly while keeping your head down. What happened to your inner fire?”
I open my palm to observe my burn wounds with a bitter smile. “I’m a little burnt out, I guess.”
“At least you still have your morbid sense of humor,” Lancelot comments.

Realm Lovejoy is an American writer and an artist. She grew up in both Washington State and the Japanese Alps of Nagano, Japan. Currently she lives in Seattle and works as an artist in the video game industry. CLAN is her first book. You can find out more about her and her books at realmlovejoy.com 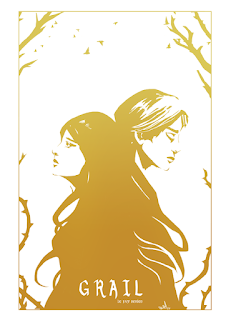