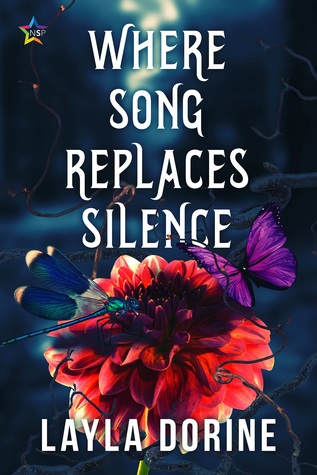 Last year I was lucky enough to recieve an ARC of the fantasy book Where Song Replaces Silence by Layla Dorine through Netgalley. I've now read the book and today I'll post my review.

Description from Goodreads
Raze halts his midnight joy ride to give chase to twinkling lights that appear in the road before him and then lead him deep into a forest, where he falls into another world. There, magic is real, wishes are granted, and no one is considered odd or out of place.

Raze has never fit in anywhere in his own world and uses his angry attitude to keep others at bay and mask his anxieties and fears in this new place. A dangerous combination in Loas, where rudeness is frowned upon and foul language can land him in a dungeon.

Rurin, an inhabitant of Loas, tries to teach Raze about their world, its magic and its residents, but he faces Raze’s stubborn resistance at every turn. Bitter about his past, pessimistic about his future, Raze sees what could be, but he struggles to accept it. In the meantime, his encounters with the Fae range from hostile sarcasm to potential danger. While he attempts to keep the promises he’s made to Rurin and follow the rules laid out for him, Raze grows more and more curious about the place where he’s landed. It’s too bad he keeps making poor choices.

As the connection between them grows, Rurin works to keep Raze from being banished, but Raze may be cast out of the Loas before he has the opportunity to discover the true reason he was led there in the first place.

My Thoughts on the Book
It's a beautifully written book about acceptance and discovering who you really are. I really liked the fantasy world the author had created and the descriptions in the book in addition to the subtle gay romance.
fantasy leseeksemplar netgalley omtale roman