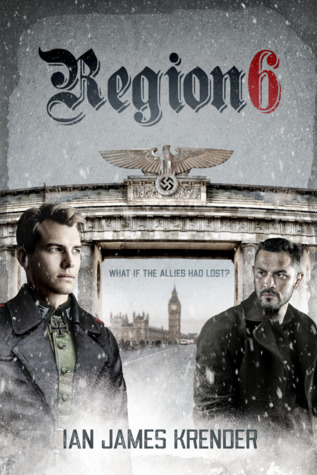 Last year I was lucky enough to recieve an ARC of Region 6 by Ian James Krender through Netgalley. I've now read it and today I'll post my review.

Description from Goodreads
It is four decades since the Allies lost World War II. Life in Britain–now known as Region 6–is harsh for most, but many have thrived, perceiving the Nazi regime as a decisive government that has brought peace and prosperity to a continent. They view the resistance as terrorists.

Thomas was born into a working-class family tainted by distant Jewish heritage. After witnessing his parents’ brutal murder and facing a lifetime of low-paid factory work, he joins the resistance movement. Brave, and a natural leader, he is rapidly promoted, eventually gaining a seat on the British Liberation Army Council.

Stephen has led a privileged life. Born into a wealthy family, he has enjoyed the fruits of National Socialism. After graduating from Cambridge, he joins the Gestapo and is placed undercover to spy on Thomas.

Confronted with the truth of the Holocaust and the horrors perpetrated by the regime, Stephen is forced to choose between everything in which he has been brought up to believe or play a key role in an audacious attempt to overthrow the government.

My Thoughts on the Book
Region 6 was an easy to read book where the story grabs you from the start. The author managed to create a very plausible dystopian world in the aftermath of WWII, considering how WWII actually was and the characters were well written. Even if Region 6 is a standalone, I think the concept would work great as a trilogy, especially considering the ending. The book also used a bit of the us versus them in the sense of Nazi regime and their wealthy collaborators versus working class resistance, though the third and almost invisible group is the "untermenchen".
leseeksemplar netgalley omtale roman thriller