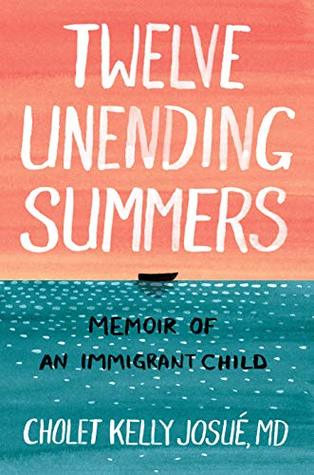 Last year I was fortunate enough to recieve an ARC of the memoir Twelve Unending Summers: Memoir of an Immigrant Child by Cholet Kelly Josue through Netgalley. I read it shortly afterwards, but I haven't published my review until now.

Description from Goodreads
Bahamian. Haitian. American. Where can I fully belong?

At age sixteen, Cholet Josué arrived on the shores of Miami in a wooden boat—and immediately put the past behind him. More than two decades later, the elusive question of identity pursues him, forcing him to confront a difficult truth: the cultures that formed him have each indelibly stamped his soul. Courageously, Cholet dismantles his own story to uncover a way to unashamedly, unabashedly fit in with three different worlds while belonging to none.

Honest and compelling, Twelve Unending Summers is a deeply personal journey that resonates with the universal human need to find a home and embrace the legacy of family heritage.

My Thoughts on the Book
Twelve Undending Summers is a raw and honest memoir about being an immigrant, ending up having several identities and not quite fit into any of them. It's also a book about hope, courage and doing what you got to do in order to survive.
biografi leseeksemplar netgalley omtale