Review; Under the Guise of Death by Vivian Conroy 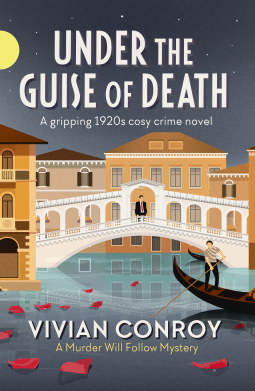 Ages ago I was fortunate enough to recieve an ARC of the crime novel Under the Guise of Death by Vivian Conroy through Netgalley. I read it shortly afterwards and today I'll post my review.

Description from Netgalley
In the City of Masks, deadly secrets are about to be revealed…

While attending a lavish masked ball in Venice, retired Scotland Yard detective Jasper has a shock when, at the midnight demasqué, he spots a woman whose accidental death he investigated in England three years ago.

Even more stunned than Jasper is the woman's husband, Lord Bantham, who has since remarried, not to mention his new wife who sees her acquired position and wealth slip away. Then there are her old friends who all seem to have known more about the 'accident' than they ever let on.

When the resurrected lady is found dead the next morning on one of Venice's many bridges, the question is: who wanted Lady Bantham to die, again?

The third book in the Murder Will Follow series, this is a gripping mystery perfect for fans of Agatha Christie and Robert Thorogood.

My Thoughts on the Book
Under the Guise of Death has an Agatha Christie feeling over it, which I really liked. I really liked Jasper and Red. The plot and storyline was interesting and had quite a few red herrings, so I had no clue who the murderer was until the end (especially as several characters had motive). In general, this is a great homage to the Golden Age mysteries and I enjoyed this book a lot more than the previous book in the series.
krim leseeksemplar netgalley omtale roman