Review; Lightning Sky: A U.S. Fighter Pilot Captured During WWII and His Father's Quest to Find Him by R.C. George 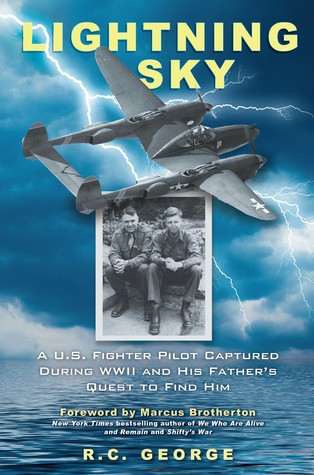 A while ago I was fortunate enough to recieve an ARC of the biography Lightning Sky: A U.S. Fighter Pilot Captured During WWII and His Father's Quest to Find Him by R.C. George through Netgalley. I read it shortly afterwards and today I'll post my review.

Description from Goodreads
A U.S. fighter pilot captured by the enemy. A father determined to rescue his son. One of the most remarkable and moving true stories of faith and perseverance to come out of World War II.

October 6, 1944. Twenty-year-old Army Air Corps Second Lieutenant David "Mac" Warren MacArthur was on a strafing mission over Greece when a round of 88-mm German anti-aircraft flak turned his P-38 Lightning into a comet of fire and smoke. Dave parachuted to safety as the Lightning lived up to her name and struck the Adriatic Sea like a bolt of flames. In minutes, he was plucked from the water--only to find himself on the wrong end of a German rifle pointing straight at his head.

Dave's father, Lieutenant Colonel Vaughn MacArthur, was a chaplain with the 8th Armored Division of Patton's Third Army when he learned of his son's capture. He made it his personal mission to find him. For the duration of the war, as Dave was shuttled from camp to camp--including Dachau--his father never stopped searching. Then in May 1945, Vaughn's last hope was Stalag VII-A in Moosburg, Germany. Through the barbed wire fence, he cried out his son's name. Incredibly, out of tens of thousands of POWs, one of them, squinting into the sunlight, turned and smiled.

Father and son spent the next two weeks together celebrating, a forever cherished memory. Over the next twenty-five years, Dave would go on to honor his father on rescue missions of his own, becoming a highly decorated and genuine American war hero. In both Korea and Vietnam, Dave would carry with him the legacy of a great man who gave everything to save his son.

An inspiring, harrowing, and unforgettable chronicle of love of family and love of country, Lightning Sky is a timeless testament to extraordinary lives in extraordinary times.

My Thoughts on the Book
This is a well-written book about the story of Dave and how he managed to survive as a POW during WWII. The book might have been a bit rushed in the end, but in general this was an interesting read.
biografi faglitteratur historie leseeksemplar netgalley omtale