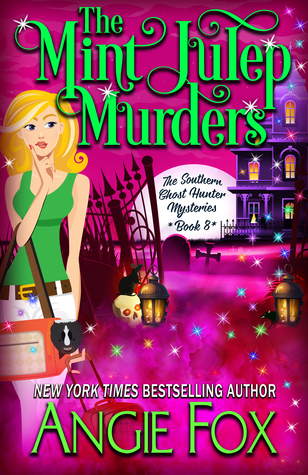 Earlier this year I was fortunate enough to recieve an ARC of the cosy mystery The Mint Julep Murders (Southern Ghost Hunter Mysteries #8) by Angie Fox through Netgalley. I read it shortly afterwards and today I'll post my review.

Description from Goodreads
For Southern girl Verity Long, friendship means sitting down to stories and sweet tea on the front porch. For her gangster ghost housemate, it means dragging Verity out to a remote haunted asylum during a raging thunderstorm to do a favor for a long-dead mob boss.

But Verity is always ready to help out a friend, even one as eternally eccentric as Frankie. And in the case of Mint Julep Manor, the stakes are too high to refuse. The criminally insane mob boss holds a secret to Frankie’s past, one that might set Frankie free. Do the favor—survive the favor—and they might change Frankie’s afterlife for good. Fail, and they might never leave the asylum.

My Thoughts on the Book
Murder, haunted asylums and gangster ghosts was certainly a fun combination. I loved Verity, Frankie and Levi as well as several of the other characters in the book. It was a well paced plot with several twists and turns and the characters were well developed, even the ghostly ones.