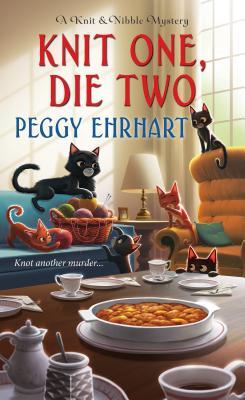 Earlier this year I was lucky enough to recieve an ARC of the cozy mystery Knit One, Die Two by Peggy Ehrhart through Netgalley. I read it shortly afterwards, but I haven't published my review until now.

Description from Goodreads
When Arborville, New Jersey's snooty theater scene is upstaged by a shocking murder, Pamela Paterson and her Knit and Nibble knitting club must act quickly to stop a killer from making an encore performance . . .

Knit and Nibble's numbers are growing! In addition to a litter of adorable kittens, the knitting club just welcomed their newest member, Caralee Lorimer, who's learning to knit for her upcoming role in A Tale of Two Cities. According to the amateur actress, the behind-the-scenes drama at the theater is getting downright catty, and Caralee wants a reckoning for Arborville's pretentious suburbanites. Her claws are out, and just like her character in the play, Caralee is ready to name names. But before she can finish her snitchy stitches, Caralee is killed in a suspicious theater accident. Someone thinks they've staged a perfect murder, but Pamela and her Knit and Nibblers are ready to pounce on the real killer . . . before it's curtains for anyone else!

My Thoughts on the Book
Knit One, Die Two is a sweet and charming cozy mystery (especially because of the kittens) and it has great descriptions. The downside with this book is that even though it has some action, it's not as much as other cozy mysteries.
krim leseeksemplar netgalley omtale