Review; Love Is Love: A Comic Book Anthology to Benefit the Survivors of the Orlando Pulse Shooting by Marc Andreyko and others 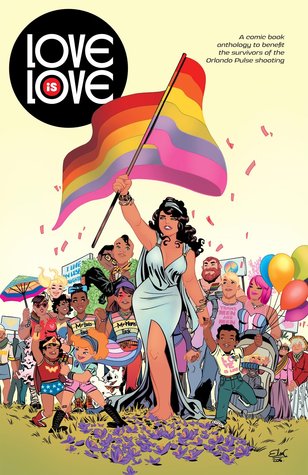 As I'm a fan of graphic novels and comics in addition to being bisexual, I couldn't resist the comic anthology Love Is Love: A Comic Book Anthology to Benefit the Survivors of the Orlando Pulse Shooting by Marc Andreyko and others. Today I'll post my review.

Description from Goodreads
The comic industry comes together in honor of those killed in Orlando. Co-published by two of the premiere publishers in comics—DC and IDW, this oversize comic contains moving and heartfelt material from some of the greatest talent in comics, mourning the victims, supporting the survivors, celebrating the LGBTQ community, and examining love in today’s world. All material has been kindly donated by the writers, artists, and editors with all proceeds going to victims, survivors, and their families. Be a part of an historic comics event! It doesn’t matter who you love. All that matters is you love.

My Thoughts on the Book
Love is Love is a moving tribute, with a great variety of comics in it. What annoyed me a bit with the anthology was that there were very few comics with bisexuals and trans people and in one instance a trans person was deadnamed. Also, although the anthology was a tribute to the Pulse victims, was it really necessary portraying them as they were on the floor bleeding/dying? It's also evident that a lot of the creators were straight, as some of the comics were a bit distant in a way.

But gotta give the anthology credit where it's due, which is raising awareness, and money, towards LGBT+ causes.
antologi omtale tegneserie