Review; Sherlock Holmes and the Case of the Undead Client: Being Book One of the Unpublished Case Files of John H. Watson, MD by M.J. Downing 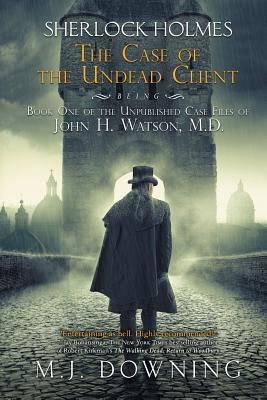 Last year I recieved a press copy of the novel Sherlock Holmes and the Case of the Undead Client: Being Book One of the Unpublished Case Files of John H. Watson, MD by M.J. Downing through Netgalley. I read it shortly afterwards and today I'll post my review.

Description from Goodreads
Sherlock Holmes has only been deceased a month when Dr. John Watson, still grieving, recounts his final case with Holmes. A terrifying mystery, it sends Watson and Holmes into the dark reaches of London's back alleys - and the human soul.

It begins when Anne Prescott, a lovely Scottish nurse, begs Sherlock Holmes and Watson to help her find her fiancé and her sister, who have gone missing in the teeming streets of London. Immediately, Watson feels an attraction to her that shocks him. Newly married to Mary, and deeply in love with her, he struggles to put Anne out of his mind.

As Watson and Holmes dig into the slums and sewers of London looking for Anne's fiancé and sister, they uncover a deadly web of bloody murders, horrific medical experiments, and even voodoo ritual that threatens not only London, but the entire British empire, and beyond.

Watson must call on his unique combination of expertise in the medical sciences, as well as his military training to stop this killer before London --and Anne -- are lost to the killer's bloody plan.

But time is short and the mystery ever more complex. How can he manage his feelings for Anne? What about his loyalty to Mary? He can't have both.

My Thoughts on the Book
I loved the original Sherlock Holmes books by Conan Doyle, so I wanted to give this one a shot thinking it couldn't be worse than Pride and Prejudice and Zombies.

Although I liked the plot and the story itself, I am a bit torn in general. One thing is that I didn't think Dr. Watson could be so stupid in terms of his feelings for Anne and act on it as he had Mary. Sherlock was also a bit "off" in a way, so I don't think the author managed to capture the essence of the famous duo correctly in this book. I also noticed the use of "the thousand-yard stare", which wasn't a wording used until WWII in the Pacific, so it's too new to be used in a Victorian setting.

The book did however cleverly mesh together zombies and Jack the Ripper in addition to being fast paced with lots of action.

It's not that it is a BAD book, but it had some room for improvement.
krim leseeksemplar netgalley omtale roman skrekk