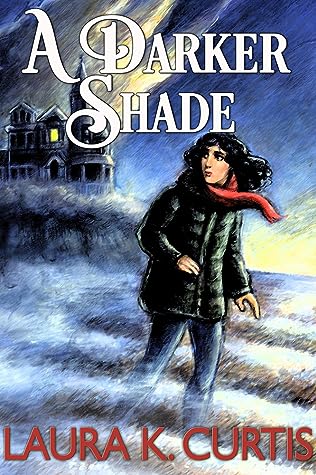 Last year I was fortunate enough to recieve an ARC of the horror novel A Darker Shade by Laura K. Curtis. I read it shortly afterwards, but I haven't published my review until now.

Description from Goodreads
What is haunting young Liza Prescott?

Molly Allworth has been in service since leaving college when her mother died. Still, her situation is getting desperate and when the agency offers her a position that sounds too good to be true, she cannot resist.

Soon she finds herself in a remote house in Maine, caring for a little girl who swore she saw her mother’s ghost…before she stopped speaking entirely. Nathaniel Prescott, the child’s father, thinks any belief in the supernatural is absurdly credulous. Molly’s history and heritage, however, have given her a wider view.

There’s a significant bonus for Molly if she lasts the year. But as winter closes in and mysterious, often creepy events begin to occur, even her growing affection for Nathaniel and Liza may not be enough to make her stay.

My Thoughts on the Book
A Darker Shade is a well written book on so many levels. The characters are well developed, even if one or two of them are a bit of a pain in the arse. The plot and storyline has enough suspense to make it engaging and it has an eerie atmosphere from time to time. It was also really neat that the book also added context for some of the history, such as the poor treatment of Native Americans, especially the children, in the early 1900's. The book also has some gothic horror elements, such as a somewhat isolated house.

The only bad thing is that I felt the ending was perhaps a bit rushed, but that's a small detail.