Review; The Escape of Robert Smalls: A Daring Voyage Out of Slavery by Jehan Jones-Radgowski and Poppy Kang 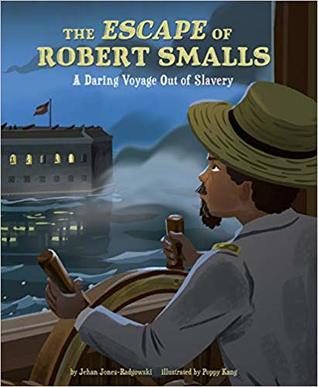 Last year I was fortunate enough to recieve an ARC of the picture book The Escape of Robert Smalls: A Daring Voyage Out of Slavery by Jehan Jones-Radgowski and Poppy Kang through Netgalley. I read it shortly afterwards and today I'll post my review.

Description from Goodreads
The mist in Charleston Inner Harbor was heavy, but not heavy enough to disguise the stolen Confederate steamship, the Planter, from Confederate soldiers. In the early hours of May 13, 1862, in the midst of the deadly U.S. Civil War, an enslaved man named Robert Smalls was about to carry out a perilous plan of escape. Standing at the helm of the ship, Smalls impersonated the captain as he and his crew passed heavily armed Confederate forts to enter Union territory, where escaped slaves were given shelter. The suspenseful escape of the determined crew is celebrated with beautiful artwork and insightful prose, detailing the true account of an unsung American hero.

My Thoughts on the Book
This was an interesting picture book to read, especially as it's inspired/based on real events. The illustrations fit the story well and sets the mood. I think this book would be great in a classroom library and/or could work well in terms of introducing kids to the topics of civil war and/or slavery.
barnebok bildebok faglitteratur leseeksemplar netgalley omtale