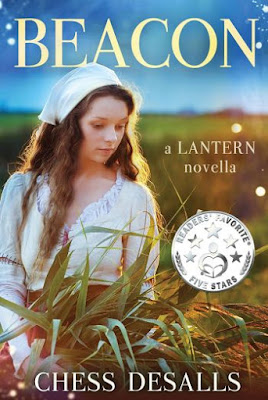 When Serah’s life in Havenbrim becomes unbearable, she accepts an apprenticeship with a celestial mechanic and glazier. Her master assigns her the task of opening a globe framed in copper. But the glass and seal are unbreakable. The solution to the puzzle traps Serah inside the globe, and transports her to a world where she longs for home.

Previous book in the series (click on the image for Goodreads link):

EXCERPT
“Please address me as Machin,” said the man. He stood from the table. Through an archway at the opposite end of the room, a whooshing sound roared from a furnace. Flames inside it swelled to life. “Ah, right on time,” Machin murmured. “Follow me, Serah Kettel.”
She followed with timid footsteps as Machin hobbled to the furnace. Orange flame reflected off her face, warming her cheeks and nose. Machin wrapped a hand in a leather glove and reached into a bucket next to the furnace. He pulled out the largest set of cooking tongs she’d ever seen. Wedged between the ends of the tongs was a smooth, round object. The material was black and shiny.
“What kind of stone is it?” Before she could get a better look, Machin thrust the tongs and all into the mouth of the furnace.
“Not a stone, but a special form of tektite,” he said. “Or as I like to call it, Celestial Glass.”
Serah glanced up at the lanterns hanging from the ceiling and pointed. “Will it become one of those?”
Machin smiled. “Eventually.”
Serah nodded, pleased her interview seemed to be going well. She wasn’t sure what she’d expected. She’d had a vague understanding of Machin’s lamp making. He was better known for his work in the mechanical sciences. Young men and women from every corner of Havenbrim, a village in Llum sought to be his apprentice. But Machin took in only one apprentice at a time.
With Machin focused on the furnace, the room grew warmer and quieter.
Serah’s eyes glistened. “What is it that your apprentices do?”
“Tend the lanterns. They’ll need to be shined and polished.”
Solemnly, Serah bobbed her head toward a footstool set against the wall. The lanterns were the only items in the cottage that weren’t covered in dust. “Is that all?”
“And let me know if any of them burn out.” He pulled the tongs from the furnace.
Serah blinked. The dark material glowed orange. Machin brought the tongs close to his lips and blew across the glow. As the object cooled, it changed from orange to a clear shade of crystal.

About the Author
Chess Desalls is the author of award-winning young adult fiction. Her nonfiction writing has been included in academic and industry publications, with a focus on law and technology. She's also a contributing editor for WritersTalk, South Bay Writers' monthly newsletter. When she's not reading or writing, she enjoys traveling and trying to stay in tune on her flute.Sign up for Chess's newsletter to receive updates on giveaways and new releases.