Review; A Body in the Bookshop by Helen Cox 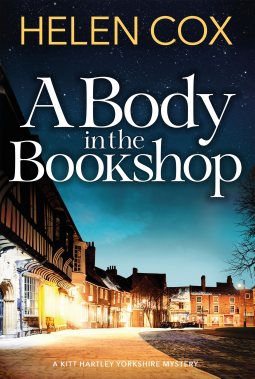 Earlier this year I was fortunate enough to recieve an ARC of the book A Body in the Bookshop by Helen Cox through Netgalley and it's the second book in the series about Kitt Hartley. I read it shortly afterwards and today I'll post my review.

Description from Netgalley
It's nearly Christmas in York, but it seems the season of goodwill hasn't touched everyone...

When DS Charlotte Banks is suspended from the police on suspicion of assaulting a suspect in the burglary of a local bookshop, librarian Kitt Harley and her friend Evie Bowes refuse to believe she is guilty. But why is she being framed?

With Charlotte's boss DI Malcolm Halloran unable to help, Evie decides to take matters into her own hands. Kitt takes little persuading to get involved too - after all, as well as Charlotte's career to save, there are missing books to be found!

From the tightknit community of York's booksellers, to the most gossipy bus route in the country, Kitt and Evie leave no stone unturned to get at the truth behind the burglary.

Then the discovery of a body raises the stakes even higher. For Evie, and now Kitt, this case is as personal as it gets. Can they catch the murderer in time to turn a bleak midwinter into something merry and bright?

My Thoughts on the Book
As I've read the first book in this series, I just had to read this one too. I must admit that I liked Kitt better in this book, as I struggled a bit with her in the first one. The mystery is well developed, aside from a tiny loose end in relation to one of the minor characters. The book also tackles self esteem, without it being an overpowering topic.

I also really liked that it was a slightly diverse cast, as Grace had Indian heritage and Charley was lesbian. I thought that the scene with Charley and Evie at the Stonegate Teddy Bears tearoom was really sweet, but I might be a bit biased as I found that place a bit cute.

For those who wonder, yes, there is indeed a teddy bear shop combined with tearoom in York and it's called Stonegate Teddy Bears. When I was in York back in 2014 I visited the place and it is really charming, even for adult. So if you ever visit York, feel free to check out that place.
krim leseeksemplar netgalley omtale roman