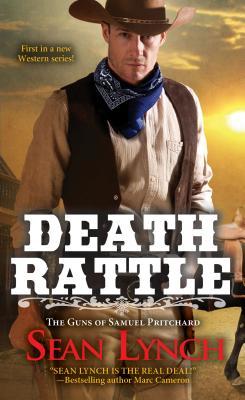 A few months ago I was lucky enough to recieve an ARC of the western novel Death Rattle (The Guns of Samuel Pritchard #1) by Sean Lynch through Netgalley. I read it shortly afterwards and today I'll post my review.

Description from Goodreads
From acclaimed author Sean Lynch comes the epic saga of Samuel Pritchard, a young man coming of age in the Civil War, riding tall with the Texas Rangers, and becoming one of the greatest gunfighters of his time . . .

In 1863, a teenaged boy fled his home in Atherton, Missouri, to escape the power-hungry men who murdered his father and stole his family's land. He joined the Confederacy under an assumed name and led guerilla raids in the Civil War. Then came a decade as a Texas Ranger. Now, after ten blood-soaked years, he is finally coming home. Finally using his real name. And finally getting revenge against the cold-hearted devils who destroyed his family and his life . . .

This is the story of Samuel Pritchard. Now a small town sheriff with a long history of violence, a deep sense of honor, and wild streak of justice as dangerous as the guns that made him famous . . .

My Thoughts on the Book
Death Rattle is a fast paced western that was an easy read as well. I liked the character Samuel Pritchard and his sense of justice. I can admit this was the first time I've read a western, but it will not be the last, as I want to read the rest of the series.