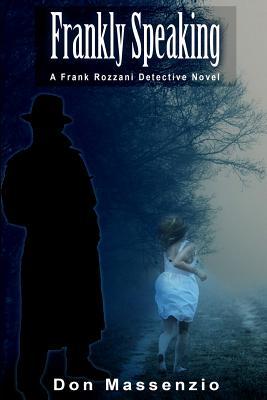 It's time for Mystery Thriller Week again and the first novel I'm going to review is Frankly Speaking by Don Massenzio, which I was fortunate enough to recieve as an e-ARC/press copy from the author.

Description from Goodreads
A 16 year old girl has disappeared. The police believe she is a runaway. Her parents believe she has been taken and is being held against her will. When the parents enlist the services of Frank Rozzani, a former police officer turned private detective, a series of events begins to unfold that implicates a popular local pastor and the religious stronghold of the ultra-conservative community. Frank Rozzani, a transplant to Jacksonville, Florida from Syracuse, New York, must find the young girl despite the obstacles launched at him from the local police and others whose interests may be compromised by his investigation. Frank enlists the help of his associate Clifford "Jonesy" Jones to find the girl, uncover the conspiracy, and stay alive. While solving the case, Frank must deal with the demons that drove him from Upstate New York causing him to leave traumatic memories and his children behind.

My Thoughts on the Book
I really liked the book, as it was fast paced, had the "right" amount of suspense and the characters are more human than the cookie-cutter characters, esp. Frank, Jonesey, Anita and Fat Sam. And don't forget Lucy, Frank's dog.
cloak and dagger mystery challenge krim leseeksemplar mystery thriller week omtale roman